On the Jones Falls Trail in Druid Hill Park in Baltimore, Maryland | Photo by Side A Photography 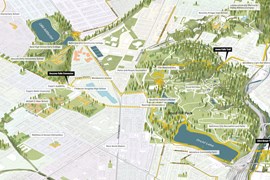 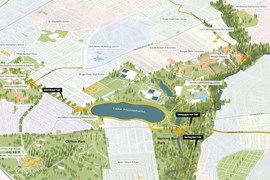 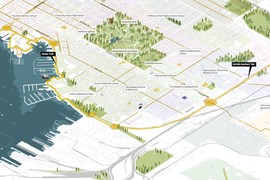 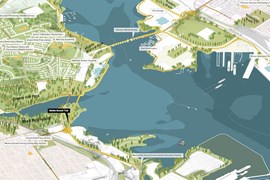 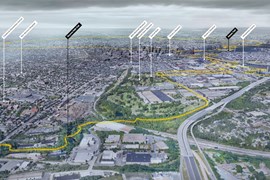 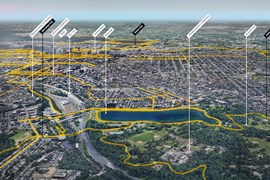 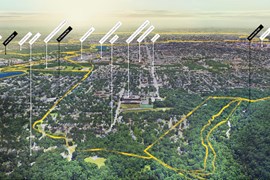 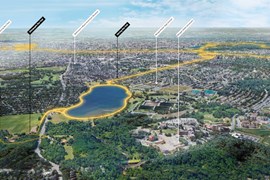 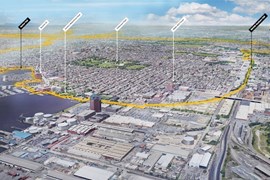 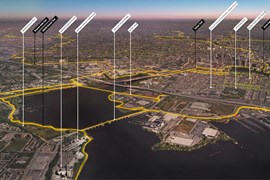 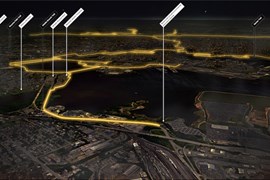 Greenway coalition partners Greater Baybrook Alliance and MedStar Harbor Hospital are spearheading an effort to design a trail connection that will link residents of Baybrook and Brooklyn in south Baltimore to the Middle Branch trail and broader Baltimore Greenway Trails Network. An important feasibility study and preliminary design being led by Greater Baybrook Alliance will also identify a trail connection through south Baltimore to BWI Thurgood Marshal Airport and the Baltimore & Annapolis Trail – making the Baltimore Greenway a regional Maryland trail network. When completed trail users will be able to travel by trail from Baltimore to Annapolis, and beyond.

This mostly complete section of the Greenway heads southeast on the Gwynns Falls Trail from Gwynns Falls/Leakin Park—one of the largest urban parks in the country—to Middle Branch Park, with a southern connection to Cherry Hill Park. It connects several historically significant neighborhoods and parks, the oldest railroad viaduct in the country, the B&O Museum and roundhouse (the birthplace of the railroad in America), St. Agnes Hospital, Leon Day Park, Carroll Park and many other significant historical destinations.

The loop segment extends from Hanover Street Bridge—on the southern side of the Middle Branch of the Patapsco River—north to Port Covington. A large-scale planning and redevelopment project at Port Covington for Under Armour’s world headquarters is underway, which will include public shoreline access and the connecting of both sides of the river via a disused railroad trestle. The corridor travels through one of the last undeveloped sections of the Baltimore shoreline, provides great views of the city skyline and passes by many historical sites.

The route, which includes parts of the Jones Falls Trail and Gwynns Falls Trail, will also provide further access to the Inner Harbor and some of the city’s other popular tourist destinations as it makes its way to Canton Waterfront Park.

This segment of the project involves the transformation of a north-south utility corridor kissing the southern end of the Herring Run Trail. In conjunction with an unused railroad corridor, it supports the economic development and growing population of several neighborhoods—including Brewer’s Hill, Baltimore Highlands and Highlandtown—which are experiencing rapid population growth including some of the most diverse demographics in the region. This includes the ongoing additions of breweries, residential and commercial spaces, tech hub startups, artists  workshops,  tight-knit immigrant communities and more.

The route for the future “Highlandtown Highline”—elevated in a few sections provides fantastic views —extending south of Highlandtown and then swinging west toward the Inner Harbor. It provides a fantastic gateway connection to the waterfront from East Baltimore while activating new development and growing neighborhoods  emerging in greater Highlandtown.

The BGE utility corridor that runs north of the Highlandtown Highline route and links to the Herring Run Trail will serve as a connector to the adjacent residential neighborhoods and provide a direct trail link to the future Inner Harbor rail-trail from Northeast Baltimore.

The segment heads north to Lake Montebello along the existing (and recently improved) Herring Run Trail, which runs parallel to Herring Run and is surrounded by residential and Main Street neighborhoods, as well as parkland consisting of stream valleys, forests, meadows and ball fields.

The trail takes users along the historic mill valley of the Jones Falls while providing direct access to four universities, including the University of Maryland, Johns Hopkins University, the Maryland Institute College of Art and the University of Baltimore, as well as to many of Baltimore’s unique green spaces, neighborhoods and cultural attractions including the Mayland Zoo, the Baltimore Streetcar Museum, The Rawlings Conservatory and Cylburn Arboretum.

This segment—which essentially cuts through the middle of the project loop via the Jones Falls Trail—extends from the Inner Harbor of Baltimore north to Cylburn Arboretum (and will eventually extend to Mount Washington), passing shops, natural areas, farmers’ markets and Druid Hill Park—a major green space and civic attraction.

Lake Montebello is a reservoir serving the region’s drinking water system and has a 1.3-mile walking, biking and fitness path—one of the most popular places in the city for recreation, social gatherings and physical activity (particularly from the nearby neighborhoods of Coldstream-Homestead-Montebello, Belair-Edison and Hamilton-Lauraville).

Just north of Lake Montebello is Morgan State University, a historically Black College and University, which is significant to the post-Civil War era and the American Civil Rights Movement where many notable Baltimoreans and social justice advocates studied. To the west of this corridor is the main campus of Johns Hopkins University, Wyman Park Dell and the bustling neighborhoods of Remington and Charles Village, just a short distance from Druid Hill Park and the Jones Falls Trail.

This corridor route stretches through one of the last undeveloped sections of the Baltimore shoreline while providing great views of the city skyline and access to many historical sites. The segment extends from Middle Branch Park—on the southern side of the Middle Branch of the Patapsco River through downtown and the Inner Harbor to Canton Waterfront Park.  From the Middle Branch It heads along the Westport waterfront and north towards Port Covington— a large-scale redevelopment project for Under Armour’s world headquarters—and connects Sharp- Leadenhall, a historic Black Community, and the historic neighborhoods of Federal Hill, Fells Point, Little Italy and Canton. Much of this route will include public shoreline access, a trail on a former railroad trestle and increased access to the stadiums and downtown Baltimore.

The route, which includes parts of the Jones Falls Trail and Gwynns Falls Trail, will also provide further access to the Inner Harbor and some of the city’s popular tourist destinations as it makes its way to Canton Waterfront Park.

Another Olmsted Parkway between Druid Hill Park and Gwynns Falls/Leakin Park could serve as a multi-use pathway that connects these neighborhoods to the greater loop—providing new and improved access to jobs, schools, hospitals, shopping centers and green space. Nearby anchors include Coppin State University, Lake Ashburton, Mondawmin Mall, the Baltimore Zoo and the Parks & People Foundation headquarters, located in a repurposed, historical park property.

Heading east from Druid Hill Park is the 33rd Street Corridor. This is another route originally developed by the Olmsted Brothers and was envisioned as a connecting parkway between the east and west. Currently comprised of automobile lanes and a median strip, plans are in the works to create a multi-use pathway that connects the Herring Run Trail in the east with the Jones Falls Trail and Johns Hopkins University.

The route is already one of the most-used bike corridors in Baltimore, with the 0.5-mile area surrounding the corridor receiving double the use than that of the rest of the city. Coalition partners are working with city agencies, neighborhoods and professional engineers to determine how this historic corridor can be honored by bringing the original shared-use paths and multimodal intent to a contemporary vision of safe connectivity to support public health, urban greening and economic development.