This article was reprinted from the September 2017 issue of Wisconsin Bike Fed Magazine.

Biking today is different from when I grew up. There are more cars, busier streets and faster drivers, and riding on sidewalks is frowned upon. All of these factors—the cars, the busy streets, the speed that cars are traveling—add up to traffic stress, a significant factor in whether or not people will ride a bike.

Here’s the deal. The higher the level of stress, the less likely people are to bike.

Traffic stress is measured by the speed limit of the roadway, the number of lanes and the appearance of physical barriers that prevent a bicyclist from continuing on the route. Low-stress routes are typically defined as those with speed limits lower than 25 miles per hour and two or fewer lanes of traffic; separated multiuse trails are the lowest-stress routes of all. Treatments such as separated bike lanes can sometimes mitigate most of the traffic stress; but at other times, even where there is bicycle infrastructure, riding in streets can be very stressful.

Southeast Wisconsin has more than 340 miles of world-class trails and the potential for incredible low-stress bicycling routes, but the honest assessment of access to many of those trails is a story of inequality.

A new Rails-to-Trails Conservancy (RTC) study, produced with support from the Greater Milwaukee Foundation, finds that neighborhoods experiencing inequality in Milwaukee—those where a concentration of the population lives under the poverty line, is unemployed, does not have a high school degree, does not own a vehicle and is either African American or Hispanic—disproportionately lack access to biking and walking facilities. The study, “Reconnecting Milwaukee: A BikeAble™ Study of Opportunity, Equity and Connectivity,” explores current access for bicyclists and pedestrians to employment centers, schools and a host of other destinations, as well as the impact that potential plans for new trails and biking facilities could have on the city. 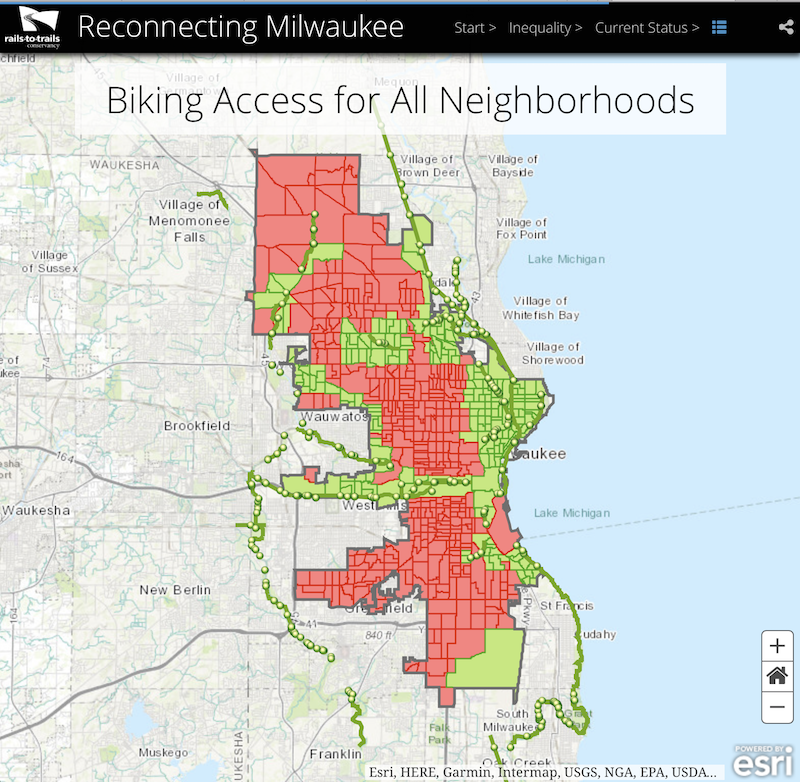 The analysis looked at the ability of Milwaukee residents to get to key destinations such as schools, libraries, grocery stores and hospitals, as well as the potential for residents to reach a job location by bike using existing bicycle routes and trail networks. The analysis produced a connectivity score for the city based on the ability of residents to access these destinations via the lowest-stress routes. In Milwaukee, that score is 59 percent citywide and even lower when you look at just the city’s trail system. Only 8 percent of residents have walking access to trails, and only 24 percent of residents have biking access to trails.

While the Oak Leaf Trail and the Hank Aaron State Trail are fantastic arteries for transportation and recreation, they aren’t maximized by the city because access is limited—particularly for those living in disenfranchised communities. Those who live in the north central and south central areas of the city are disconnected from Milwaukee’s current trail systems, and their connectivity scores show it; in neighborhoods experiencing inequality, only 3 percent have walking access to trails and only 8 percent have biking access to trails.

Two projects have the potential to change that scenario.

RTC knows that building the 30th Street Corridor and the Kinnickinnic River Trail extension will not be easy; in fact, it will be quite the opposite.

Sometimes, however, the best choice is not the easiest. Sometimes, the right choice is the one that takes time and requires thoughtful research to understand the life-changing impact projects like these can have on the framework of a city.

As part of the Route of the Badger, RTC will work with the city and our partners—Wisconsin Bike Fed, Path to Platinum, Bublr Bikes, Southeastern Wisconsin Regional Planning Commission and Wisconsin Economic Development Corporation—to generate investment in the communities who live near these trails. We want to hear their ideas, listen to their concerns and engage in transparent discussions about the impact a trail would have on their lives.

The potential of creating this infrastructure and to create a more equitable trail network for Milwaukee is exciting. And it has the potential to change the lives of literally thousands of people.

Read the study and learn more about the Route of the Badger vision to connect a 500-mile trail network in Southeast Wisconsin on the RTC website.